Born in Eket, Nigeria, Camilla has been interested in music from an early age, particularly in the fusion of African and Western music. She grew up listening to Fela Kuti alongside Jackie McLean and Charlie Parker. She began playing the saxophone when she was 11 when she won a music contest and as a result won saxophone lessons. Camilla went on to study with many jazz greats such as saxophone giant, Jean Toussaint (of Art Blakey fame), Julian Siegal and Martin Speake at Trinity College of Music in London where she gained a Masters in Jazz Performance as well as being awarded The Archer Scholarship for Outstanding Performance in 2011. In 2014, Camilla formed her own critically acclaimed band showcasing the stars of the new UK Jazz Scene. Dubbed “The Golden Girl of Jazz” by The Evening Standard, Camilla’s debut album, ‘Isang’ (pronounced E-SANG which means journey in Ibibio, her native language) received huge critical acclaim. Their follow up album, “The People Could Fly” released in 2018, featuring special guest Omar as well as in-demand guitarist, Shirley Tetteh, has already gained substantial critical acclaim with 4-star reviews from the Financial Times and Jazzwise—to name a few. The album has been featured on several key playlists such as State of Jazz and Camilla is the poster girl for Tidal’s British Jazz playlist. The band has gigged solidly being fortunate to support Courtney Pine’s album launch featuring Omar at The Barbican as well as performing at Love Supreme (where Camilla took part in a panel discussion with Kamasi Washington) and the Cheltenham Jazz Festival. They also supported Dee Dee Bridgewater at The Cadogan Hall for the 2017 London Jazz festival who was so impressed she remarked, “The world is safe because we have Camilla!” As part of the EFG London Jazz festival they performed at the Purcell room which was described by Jazz Journal as “A truly memorable concert…Jazz superstars in the making” with the London Jazz Review speaking of “the mature and imaginative compositions combined with some sublime saxophone solos.” Also, as part of the EFG London Jazz festival they performed at King’s Place to a very appreciative audience, a show that was broadcast live on BBC Radio 3. They were most recently awarded the Momentum Award (PPL) in order to complete their third studio album, Ibio Ibio, which is a tribute to Camilla’s tribe the Ibibio people of South Eastern Coastal Nigeria. The album features Daniel Casimir, Sarah Tandy, Winton Clifford, Renato Paris, Sheila Maurice-Grey, Rosie Turton, Shirley Tetteh, hip hop drummer, Daru Jones, Birmingham based rapper, Lady Sanity and Sam Jones. 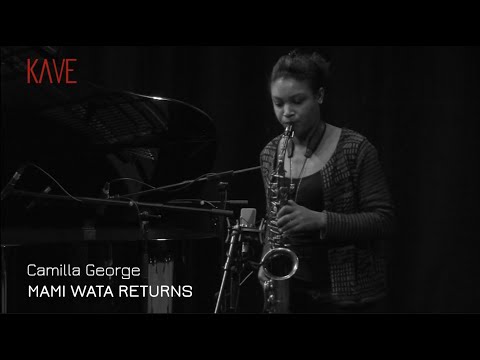